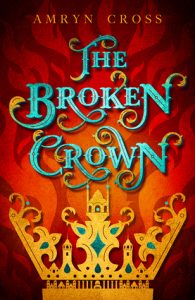 Princess Emilia is not a typical princess and her life is not as charmed as one would expect. After witnessing her mother’s execution for believing in a forbidden God, Emilia is exiled and lives among common men where she learns to fight as a soldier. Struggling with her own devotion in the God of her mother, she wishes to aid the cause of the Insurgos who are ruthlessly killed for simply worshipping Him. Soon enough princesses are called to the Emperor’s palace in order to find a wife for his son. Emilia believes this is her chance to change the laws for the people she’s come to claim as her own. Things in the palace, however, are not quite as they seem. Emilia, Prince Ronan, and the guard Felix are embroiled in a plot much bigger than they imagined.

The Broken Crown was a very interesting story. It’s a mashup of The Selection and the story of Queen Esther with a little of Rachelle Dekker’s The Choosing in the mix. I don’t know about you, but that equals perfection to me. I’m really excited to see what else is going to happen in the story since the ending is really suspenseful.

Emilia is my favorite princess and I adored her so much. She is a prime example of how a young woman can be both strong and emotional without being a block of ice with a sword. I’m also pretty amazed that I actually liked both potential love interests. It’s a shocker since I usually hate one or the other, but I just want both to be happy and loved. That said, romance isn’t the main focus and the plot is most important. I want book two right now, I’m anxious to see what’s going to happen next (and hopefully nothing too tragic). 2017 can’t come soon enough.

A tomboy with southern belle roots, Amryn Cross was born and raised in Tennessee where she learned the importance of God, family, Southern hospitality, and football. She’s loved the written word from the time she was a child, convinced the squiggly lines on top of the Hostess cupcake really spelled out a secret message.